If significant changes in production and consumption are not made, the impacts of climate change on food systems and our diets will be significant, disproportionately affecting poorer nations over wealthy ones. Much recent research and public discussion has highlighted the need for changes to diets as a means for future climate change mitigation. Animal source foods, especially beef and growing feed for livestock, are implicated as a main driver of climate impacts in the food system. Moreover, climate change has exacerbated the challenge of global food systems to provide adequate nutrition sustainably, meeting increasing demand for ever better proteins. The question then remains, how do we meet meat demands with less environmental impact and higher quality protein sources?

Recent advances in food production technologies have developed cell culturing methods to grow animal-source foods as direct replacements for conventional livestock products, which are shown to have a higher climate impact. Additionally, fungi- and plant-based options for protein replacements have grown in popularity and production scale, with familiar options such as Beyond Meat and Quorn. Even consumption of non-traditional food items in ‘Western’ diets such as insects, kelp, and other seaweeds are gaining interest as prospective foods to mitigate climate change through human diet shifts.

Novel foods — cultured meat, eggs, milk, plants, algae, bacteria, and fungi — are those produced from novel production technologies, and which may be under novel regulatory frameworks such as cell-culturing technologies. Future foods are those foods for which our production capacity and consumption in Western diets has the potential to scale up, including insects, kelp, and spirulina. Additionally, these novel/future foods are being developed and there is increased interest in consumption due to emerging climate change mitigation concerns. Some foods may overlap in both novel/future categories such as mussels (Mytilus spp.) or chlorella (Chlorella vulgaris), produced with novel technologies.

The research of myself and colleagues at the University of Helsinki focuses on the sustainability of certain foods and the role of NFFs in future diets.

We applied a diet optimisation approach, a common method for modeling more sustainable diet options, to understand how such NFFs could play a role in future diets. Minimising environmental impact in global warming potential (i.e., carbon emissions), water use, and land use, we found that diets with novel/future foods and vegan diets with protein-rich plant-based alternatives, such as tofu, legumes and pulses, could have up to 80% fewer environmental impacts than current European average (omnivore) diets.

Additionally, we found that even with an 80% reduction in animal source foods from current diets (not completely removing all ASF foods as in a strict vegan diet) all environmental impacts could be reduced by over 70%. The diet with the best compromise of low environmental impact while still meeting all nutritional requirements contained small amounts of animal source foods (e.g. dairy and mollusks) with certain novel/future foods — mostly insect meal and cultured milk — and more plant-based milks.

Although there is a lot of potential for such NFFs in diet models, there is a long way to go in terms of cultural acceptability, economic/price accessibility, and developing taste, texture, and flavour profiles for full adoption into diets at a large scale. By including NFFs in future diets, we might be able to meet the needs of more people with nutritious protein alternatives and fewer environmental impacts.

Given the negative environmental impacts and the extreme tension food production has placed on our planetary boundaries, agriculture and food systems need to make large course corrective shifts. Changes need to be made, not just in diets but in whole systems. Although adding novel/future foods to your diet might be a healthy and less environmentally impactful option, it will not be the panacea solution. No one single solution to tackle the climate crisis currently exists.

What we need are systemic changes. Future sustainability will require a shifts in two key ways: to ‘less and better,’ incorporating ‘systemic degrowth’ transitions. Firstly, such a system would not only be signified by less (e.g., downscaling of agricultural production, less over-consumption, fewer calories wasted), but would also be a food system with an entirely different ‘metabolism’. Secondly, the degrowth of the future food system would encompass entirely different forms and uses of foods, ethics of non-human beings as food, and relations of human patterns of consumption through consideration of the temporo-spatially proximal and distant non-human world. 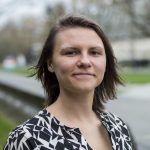 Rachel Mazac is a sustainable food systems researcher with a particular focus on sustainable diets, protein alternatives, and critical ecosystems approaches. As a PhD researcher at the University of Helsinki, Mazac works at the nexus of global systems sustainability, agroecology, and food. Mazac’s current research focuses on future diet shifts, investigating the potential of protein alternatives (e.g., novel food production systems, legumes, High Nature Value products) to lessen whole diet impacts on environmental and socio-cultural systems. Food touches us all and we all need to understand the ways we interact with and impact the world around us through food.