The Global North hypocrisy: The death of 6,500 migrant workers in the Qatar 2022 World Cup

Does the Western media really care about the lives of South Asians or are they using these claims to push a specific agenda?

Approximately 33 million Pakistanis were affected by unprecedented climate-induced flooding in 2022, even though Pakistan emits less than 1% of the world’s planet-warming gases. Millions of Sri Lankans have been driven into poverty due to the country’s recent economic crisis. In fact, the current economic crisis has been termed the starkest and most lethal since Sri Lanka’s independence from the British colonisers in 1948.

The Taliban were allowed to come into power in Afghanistan in 2021 after thousands lost their lives during the imperial adventure of the Global North in Afghanistan. Thousands of families remain in poverty in India. Millions of people in other South Asian countries (e.g. Bangladesh, Bhutan, Maldives, and Nepal) fight daily for survival and existence within the capitalist and unequal imperialist world in which they exist.

The Western media and scholars are disturbed by the 6,500 South Asian deaths in Qatar as a consequence of the construction work related to the FIFA 2022 World Cup. The 6,500 deaths, first quoted by The Guardian, is a controversial claim. Although The Guardian’s report never highlighted the age, occupation, or place of work of the deceased, the organisation used statistics from foreign embassies to establish its claim. Nevertheless, the 6,500 figure remains a central point of criticism against the Qatari government in the Western media.

This raises the question: do Western scholars and the media really care about the lives of South Asian people or are they using these claims to push a specific agenda?

The Western newspaper outlets painted Qatar as an exotic, bizarre, immoral, dangerous, homophobic, and terrorist country, without acknowledging its socio-historical impact of colonisation, imperialism, and changing demographics as compared to other countries in the region.

Numerous post-colonial and critical scholars have previously argued that Western discourse homogenised the identities of former colonial subjects. Additionally, the behaviour of former colonial subjects is oversimplified without recognising the history of colonial violence, sociocultural forces, and economic exploitation. For example, numerous anti-human laws in the Middle East like those against homosexuality are the direct outcomes of British colonialism.

In 1885, the British colonial masters, at that time, introduced a law that punished all homosexual behaviours, which laid a historical foundation for targeting the LGBTQ community within their colonies. Despite gaining independence, these homophobic laws still remain.

Today, more than half of the 70 countries that criminalise homosexuality have previously been directly or indirectly invaded by the British empire.

Likewise, branding Qatar as a corrupt nation is controversial. In 2010, when Qatar won the bid for the 2022 FIFA World Cup, the country was 19th on the list of the least corrupt countries, according to the Corruption Perceptions Index (CPI) report. On the same list, the United Kingdom held the 20th position and the USA held the 22nd position.

Our study emphasises the importance of viewing the epistemic violence from the Global North against the Arab world, and in particular Qatar, over the 2022 FIFA World Cup.

Neo-Orientalism in the Western discourse

The framework of Orientalism proposed by Edward Said aids the exploration of epistemic bias in the Western media discourse on Qatar. Said underscores the use of specific vocabulary when ‘East’ is subjected to criticism from Western scholars and media.

For example, a binary opposition is created in the discourse by terming the East as ‘them’ (e.g. wild, uncultured, and exotic), while the West is termed as ‘us’ (e.g. civilised, superior, and progressive). Hence, for an Orientalist, the world is divided into two equal halves, the superior West (us) versus the inferior East (them). This type of binary opposition and generalisation limits the understanding of agency and subjectivity in the Eastern and Western worlds.

Furthermore, Edward Said argued that the binary opposition — the West versus the East — is a common theme employed by Western scholars when discussing the Middle East.

This is a critical consideration as these Western scholars rarely acknowledge the history and influence of colonial powers in the East. Numerous scholars have claimed that the Orientalism framework has a new shift grounded in Islamophobic tropes, in light of 9/11 terrorist attacks, the war against terror, and growing extremism in the Muslim world. Thus, the framework has shifted to neo-Orientalism with epistemic violence against the Muslim world.

Some methods can be used to deconstruct the current discourse about the FIFA 2022 World Cup.

Secondly, providing a more holistic overview of Middle East countries, going beyond the coverage on oppression. This needs to include an upsurge of Muslim women’s and youth sport participation, labour reforms and LGBTQ issues awareness. Western media disproportionally reports on the problems related to the Muslim world.

Lastly, critical consciousness is required in Western media and academia when discussing South Asian expats in Qatar. South Asian migrant worker issues in Qatar are vital. However, recognising and investigating how the Global North’s historical adventures and economic disparities made, forced and displaced South Asians to labour in Qatar is equally important. 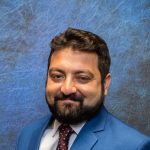 Umer Hussain is an Assistant Professor of Business and Sport Management at Ripon College, Wisconsin, USA. His areas of research include exploring the intersection of race, religion, and gender in sports. With more than nine years of experience in academia and practice, Hussain has published numerous scholarly journal articles and presented his research at many academic conferences globally. Recently, his Ph.D. dissertation was awarded as the Distinguished Dissertation in Social Sciences category for 2021-22 by Texas A&M University, USA.

New research from Rutgers University highlights the role VR plays in sports journalism and sports public relations, and provides practical recommendations on the use